Design for manufacturing and assembly (DFMA) 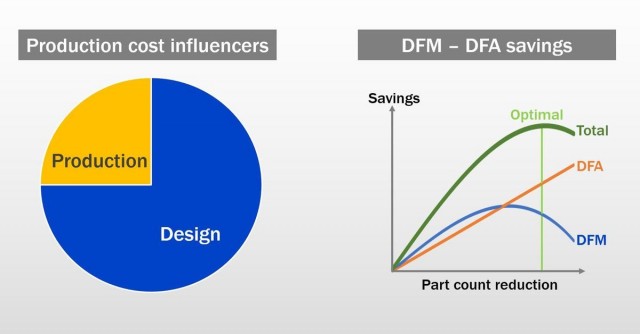 Differences between design for manufacturing (DFM) and design for assembly (DFA)

Design for Manufacturing (DFM) is a design method to reduce the complexity of manufacturing operations and the overall cost of production including the cost of raw materials.

Design for Assembly (DFA) is a design method to facilitate or reduce the assembly operations of parts or components of a product.

The difference is that one focuses on parts (DFM) and the other on part assembly (DFA).

Why using design for manufacturing or design assembly

It is usually accepted (demonstrated?) that 70 to 80% of production costs are determined by design decisions.

Hence the importance of using design for manufacturing or design for assembly.

Design for manufacturing and assembly (DFMA), the right balance

Design For Manufacturing and Design For Assembly can be contradictory. At the extreme, the DFA approach can naturally lead to having only one part: the assembly cost becomes zero.

On the other hand, it can lead to an extremely complicated part to produce, with a high cost.

It is therefore appropriate to use a combined Design for Manufacturing and Assembly (DFMA) approach, which has become the standard today.

Reduce the number of parts

This is probably the most important lever. It directly reduces the assembly cost, and a significant number of other indirect costs: administrative and logistical costs (ordering, transport, storage, etc.), test costs (for each part) and reliability costs (more parts = more risk of failure)

The use of modules allows several benefits depending on the case:

On the other hand, modularity is limited by the potential increase in assembly costs with more connections.

A multifunctional part reduces the total number of parts because instead of using two parts for two functions, only one part is needed. For example, a heat dissipator can be used as a separation as well.

It is probably the most famous lever of DFMA, sometimes called Poka-Yoke. It consists in designing parts that cannot be assembled in the wrong way or assembled on other products.

Some parts can be designed to facilitate assembly or testing. For example, in addition to their "product" function, a part can provide an assembly guide, or be reflective to facilitate inspection.

This is the counterpart of the previous lever, focused on the production of one part rather than the assembly of two parts.

This applies particularly to finishing operations such as machining and painting, which must be limited. We can also mention complex moulding parts.

It is also necessary to reduce binding tolerances or in general any "over-specification" that is not a customer requirement because they will increase production costs by imposing more robust processes, more sophisticated equipment or more extensive quality control operations.

In general, separate and complicated fasteners should be limited and simple automatic fasteners preferred.

Separate fasteners increase the cost due to additional handling and indirect management costs. Moreover, they are often sources of quality defects.

It is necessary to design fasteners that have the lowest cost, for example:

The positioning, orientation and fixing of parts must be limited, for example by using symmetrical parts to avoid orientation.

The parts must be designed to be easily and safely grasped by the operator: not too small, not too large, not too heavy, not with sharp edges or tips.

All parts should be assembled in one direction only and if possible, from top to bottom to take advantage of the effects of gravity.

Design For Manufacturing and Assembly methods

There are several detailed methods and tools for DFMA. We focus here on the fundamental principles of these methods:

Other methods associated with Design For Manufacturing and Assembly (DFMA)

Some other design methods are associated or similar to the design for manufacturing and assembly:

No comments made yet. Be the first to submit a comment

By accepting you will be accessing a service provided by a third-party external to https://www.wevalgo.com/

Experts, Consultants, Managers, you want to go further in your evaluation process towards corporate excellence

Your web solution to improve your processes and gain in efficiency.Dedicated to consultants, experts and managers, it allows to evaluate the performance of the tools of management in place.
Premium Membership